This is the second eclipse of 2015 exactly after 14 days of Solar Eclipse of 20th March 2015 we have a Total Lunar Eclipse now. This Lunar Eclipse is going to happen in “Virgo” in the lunar mansion (Nakshatra) of “Hasta”. On 4th April 2015 Earth will come in between Moon & Sun where Rahu-Ketu aligned at 16 degrees and Sun-Moon at 21 degrees.  This lunar eclipse is going to happen under the influence of Rahu so Moon will join Rahu in Virgo in Hasta Nakshatra whose lord is “Moon” only.

Those who born under the Virgo Moon and Hasta nakshatra Moon will have a direct impact of this eclipse. In Virgo Moon will join Rahu and in Pisces Sun will join Ketu with Mercury so Moon (mind) and Sun (soul) both will get influenced by Rahu, Ketu& Mercry.

Last Solar Eclipse in Pisces denotes dissolution and this Lunar Eclipse in Virgo means gathering all scattered pieces and joins them. See how this eclipse energy works Pisces is water and last zodiac so dissolution and Virgo is an analytical sign which puts everything together to get the result. Both eclipses show “Negation of Ego” and discovering “True Self” that is why eclipses make us learn ending of few unnecessary things and start of new things which are necessary in development in life.

This eclipse would be visible in many parts of Asia, North America, South America, Pacific Ocean, Atlantic Ocean, Indian Ocean, Arctic and Antarctica.

As we found the eclipse would be largely covering all the sea portion of our planet so let us discuss some effect on Ocean. This thing we have not discussed in last note but I feel it is also important to know some basic interesting facts of Oceanography.

The gravitational forces of Sun & Moon cause the rise and fall in the sea level, but we will see how the pattern of tides works?

As the Earth spins on its own axis, the water in an ocean is at the same level but Earth has gravitational pull which pulls the water inside and the Centrifugal force puts the water outside.

But when the Moon’s gravitational force pulls the water towards Moon then a “Bulge” created and Moon is revolving around Earth and due to Earth’s own rotation this “Bulge” also moves, in this way “High Tides”&“Low Tides” occur.

During eclipses the Sun-Moon-Earth all line up very accurately than at normal Full or New Moons. Then the difference on tides is slightly different.

In Lunar eclipses the Sun is on one side of Earth and the Moon on the other side so the tidal effect is same, though Sun has bigger gravitational pull but it is quite far from Earth so Moon’s pull balances the tidal effect of Sun’s pull.

In Solar eclipses the Moon and the Sun are on the same side of the Earth so the whole gravitational pull comes on one side then we have the highest tides.

Some people say during eclipses the gravitational pull of Sun and Moon effects theTectonic Plates which can cause higher magnitude Earthquakes. But still research is going on so no point to discuss further.

To find out the time of eclipse we can refer NASA’s website. 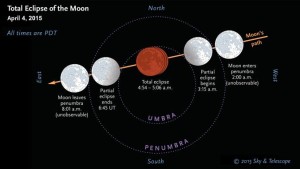 Here the time is given as per the Pacific Day Light (PDT).

Whenever we want a time for any country then we can refer that particular country’s Standard Time ahead/behind to GMT or UTC.

Likewise we want to find the time for India the India Standard Time (IST) is 5 hours 30 minutesahead of UTC or GMT denoted as IST (GMT+5.5).

In this way we can find out the timing of Eclipse as per any country’s required time. In this note we put focus on Oceanography and Time Zones which is interesting in terms of Geological and Geographical perspective. Rather putting much stress on Prediction of Eclipse it is better to understand the concept and effect on our planet. This makes astrology even more interesting because it gives knowledge to understand other topics also.

Information of Eclipses of 2015

I hope you all enjoyed reading my both notes on Eclipses. Thank You! 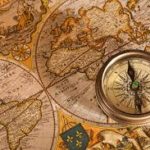