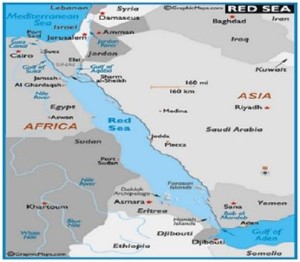 All the Middle East countries are major producers of Oil and they supply the crude through Suez Canal which is situated exactly in Egypt. Then this crude transported to European region through Mediterranean Sea which is well connected with Suez Canal.

Last week Crude Inventories were on higher side so the price was restricted to $117 per barrel but I feel now Crude will again continue its rising trend.

During the seven months of Gulf War, prices jumped 130% as OPEC spare capacity was reduced to 1.8mmbbl/d. Similarly, today, Libya and Algeria halted operations; OPEC spare capacity will also likely be drawn down to 2.1mmbbl/d, which could fuel higher oil prices in the coming one month.

In the Past during 1956-57 there was a huge Suez Crisis which totally distorted the picture of Global Economy and now again things are taking place around “Suez Canal” again, STRANGE but TRUE.

Likely to go Down –

Likely to go Up –

Disclaimer: In this article all the opinions and predictions are my personal and it has no relevance and connection with any of the report and views of any broking/equity research company.